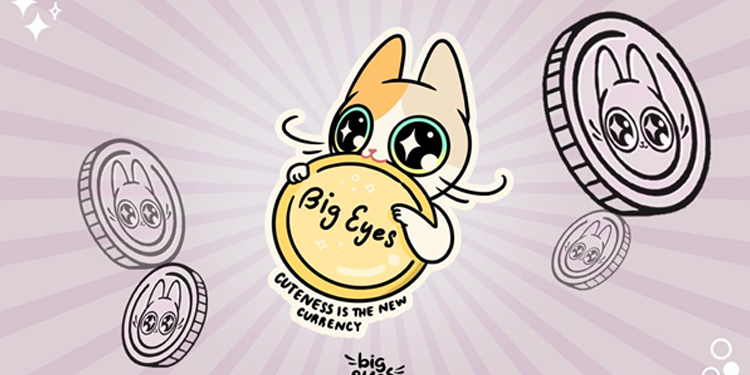 Big Eyes Coin (BIG) may be a new coin in the blockchain ecosystem, but its disruptive strength has made it a cryptocurrency market favorite. In just the first presale, it has raised over $2 million and launched a $250k giveaway competition for the crypto community. Perhaps the best way to measure the profitability of Big Eyes Coin (BIG) is to measure it briefly against the existing profit profile of major players like The Sandbox (SAND) and Theta (Theta), and we’ll be doing that very briefly.

According to CoinMarketCap, The Sandbox (SAND) currently sells at $0.83, despite the effects of the crypto collapse on its value. Also, the Theta Network (THETA) is another top utility token of the Theta Network, a blockchain protocol designed to enhance live streaming applications and incentivize computer networks to open up decentralized video streaming spaces for general use and offer them rewards in THETA.

Theta blockchain offers its users an end-to-end blockchain protocol for economic and technical purposes, allowing them to broadcast videos and offering them computing resources,  extra bandwidth, and rewards for their activities. According to CoinGecko, the price of THETA today is $1.03, so it could be a great time to buy into the crypto while the price is reasonable.

Big Eyes Coin (BIG) is going to the Moon!

Big Eyes Coin (BIG) is a meme coin touted as the next rated token in the cryptocurrency market. The project is simply more than your regular meme coin. This cat-themed coin is designed to drive charitable causes to improve ocean life and boost its members’ financial welfare by attaching them to opportunities in the NFT ecosystem and creating NFT projects to boost members’ crypto portfolios.

BIG is currently in its second stage of its presale up for sale, having raised over $2 million only after the first week. According to the whitepaper, this second stage features NFT snippet releases to community members, marking the launch of the NFT club, followed by NFT minting and trading on the platform.

Thankfully, NFT trading attracts zero gas fees on the platform, thereby lowering the entry barrier for new members and fostering a user-friendly platform. Again, NFT trade will allow the inclusion of advanced protocols in the BIG project, such as an NFT marketplace and Metaverse space.

The Big Eyes Coin developers promised to prioritize the community first in all their projects. We’re seeing this manifest incoming plans and protocols have added benefits for its members. The network has set aside 70% of the 200,000,000,000 tokens for presales, indicating its community-oriented style of dealing.

Big Eyes Coin is also largely involved in charity, so 5% of the presale revenue will be donated to a charity wallet, and $1000 has already been donated to Luna Children. The charity wallet is mainly to support organizations in marine life conservation. The upcoming pre-launch stages will feature donations to these charities.

To improve the token value, BIG developers are working on listing BIG tokens on popular cryptocurrency exchange platforms such as Kraken and Uniswap. This move is scheduled to hold in the second stage of the presale.

Like most coins, the token price will only keep increasing in value as the days go by. In fact, the BIG token team recently announced that the token price is predicted to increase by 25% after this second stage.

Big Eyes Coin is hosting a $250k giveaway for presale buyers. The first winner gets 100,000 BIG tokens, while nine other winners will split 150,000 tokens. The winners will be announced on 11th December 2022.

To find out more about Big Eyes Coin (BIG), visit the links below: