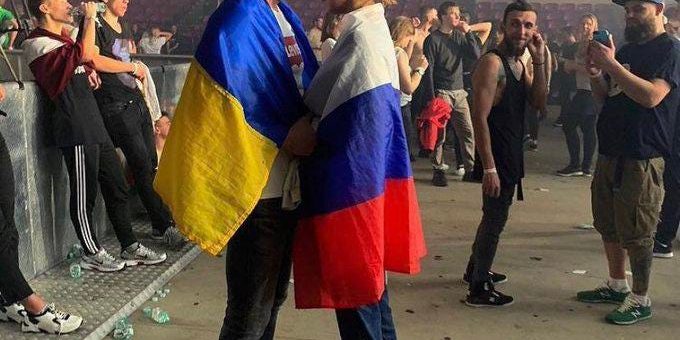 Whatever the human toll of the war in Ukraine, the ugly reality is that conflicts between nation states are won or lost as much in the monetary realm as on the battlefield.

Keeping the machinery of war raging forward will leave even the wealthiest of countries in dire financial straits. Many will resort to currency debasement, capital restrictions and unsustainable foreign debt to fund their violence. Superpowers who control the global financial architecture will often deploy sanctions to strangle lesser economies, wiping out entire business sectors and goading impoverished citizens to overthrow their leaders.

One way or another: once the money runs dry, the guns soon fall silent.

Russia’s unprovoked and brutal invasion of Ukraine will be no exception. Neither side can afford a war with no end. Yet the emergence of a new form of sovereign digital money is distinguishing this conflict from all that came before it.

Never before has the ability to finance a war – and to shield oneself from monetary attack – rested in the hands of individual citizens wielding smartphones and making personal choices without scrutiny from their government, bank or law enforcement agency. The financial libertarianism that bitcoin unlocks for the world has no parallel in history. Whether it will be written about as a force for good or for evil by historians will depend not on the underlying technology – which is apolitical and incorruptible – but on the scruples with which society collectively deploys it.

Ukraine’s government fired the opening salvo on this front on February 26th, when deputy prime minister Mykhailo Fedorov appealed directly to global citizens – not their political representatives – to donate money for his country’s war effort in bitcoin and two other cryptocurrencies.

Fedorov did not ask his audience to lobby their governments for military aid. He did not solicit donations through the cumbersome, inefficient, state-supervised infrastructure that allows bank-account holders in Seattle, Sierra Leone and Shanghai to send money to Kiev. Instead, he posted a 34-character bitcoin address in a single tweet. Anyone on the planet who copied that address and pasted it into their digital wallet was then able to teleport a donation instantly, at the click of a button, for virtually no cost, and without needing the help or permission of an intermediary.

It’s easy for Westerners living in democracies to downplay the significance of this technological feat. Westerners are accustomed to opening banking apps on our phones and swiping away our globally accepted dollars or euros. Those living in poorer countries, less so. Westerners are not accustomed to being bundled into the back of a police van because our latest bank statement included a payment to a disagreeable party. Those living in autocratic countries, more so.

Bitcoin is the first genuinely peer-to-peer monetary network the world has ever known. The individual freedom it enshrines is now helping a friendly government protect its people from a hostile one: at the time of writing, 220 bitcoin worth $9.6m had been donated to Ukraine. Crucially, as a borderless and permissionless network it’s also protecting benefactors – many Russians among them, no doubt – from persecution at home.

And yet with the good, comes the bad.

Just as an army can both liberate or annihilate a population, so bitcoin can both set people free or empower their tyrants.

Western efforts to punish Russia economically – through wide-ranging sanctions and exclusion from the international payment system Swift – expose the dark side of monetary freedom. Vladimir Putin and the oligarchs in his pocket will likely try to use bitcoin to circumvent restrictions. According to Christine Lagarde, the president of the European Central Bank (ECB), this ability to defang Western policy underlines the need for regulation in cryptocurrency markets. According to Ukraine’s Fedorov, the risk is so great that all Russians should be banned from cryptocurrency exchanges.

Lagarde’s stance needs serious caveats. Regulation, in principle, is acceptable to all but the most radical libertarians. But the devil is in the detail. The fully transparent, open-ledger transaction history on which bitcoin is built already helps law enforcement track illicit funds. Credible exchanges already block “dirty” bitcoin that is known to be the proceeds of crime. They already comply with Know Your Customer (KYC) anti-money laundering legislation. These protocols can, should and will be used to target sanctioned Russians, more or less trapping their ill-gotten gains within the cryptosphere. But regulation must not become a smokescreen for attacking bitcoin and blocking law-abiding citizens from taking custody of their wealth – an ulterior motive that Lagarde clearly harbors, believing it’s the ECB’s god-given right to bind Europeans to a monetary system that dissolves the value of their savings through negative real interest rates.

Fedorov’s proposal, meanwhile, should be dismissed out of hand.

Russian citizens are not the enemy. They are not responsible for Putin’s actions; they certainly never voted him into office, and they’re now paying dearly for his madness. Binance, one of the world’s largest cryptocurrency exchanges, struck the correct tone in response to his appeal: “We are not going to unilaterally freeze millions of innocent users’ accounts,” it told CNBC. “Crypto is meant to provide greater financial freedom for people across the globe.”

It’s important to recognize that bitcoin will help ordinary Russians as much as – and very likely more so – than their Ukrainian counterparts. Russian inflation had already surpassed 8% by the end of last year. It will now, inevitably, skyrocket as supply chains collapse, energy prices surge, and panic takes hold in financial markets.

Bitcoin’s fixed supply and seizure-resistant, non-physical design are attractive traits for civilians – on both sides of the border – who need to protect their assets from inflation and government overreach. Civilians, after all, rarely escape the cost of war. Those who survive the bombs are left to pay for them. If they’re lucky, their government will secure a debt repayment plan while rolling out tax hikes that saddle an entire generation with the cost of its military adventurism. If they’re unlucky, they face total financial destruction through hyperinflation. That’s what happened in Hungary in the aftermath of WWII, when former currency the pengő was losing 90% of its value every four days. Its replacement, the forint, lopped 29 zeros off the nominal value of the old notes.

The consequences for Hungarians who had stored their life savings in pengő does not need elaborating.

On February 28th, following a weekend of deteriorating fortunes for Russia’s military, the ruble lost nearly a quarter of its value in a single day. It continues to depreciate rapidly. Moscow has responded by banning foreigners from exiting local investments and doubling the interest rate to 20%. Russian citizens will be targeted next. These are the agonized contortions of an economy that is burning from the inside out. The ruble need not go the way of the pengő for Russians to have their wealth erased with the stroke of a pen.

Bitcoin, as the ECB’s Lagarde eloquently but unintentionally put it last year, is the solution. “If there is an escape,” she said, “that escape will be used.”

Her remarks were meant to convince democratic governments that bitcoin is a threat to the established financial order. Instead, they are showing undemocratic ones that global citizens can no longer be robbed and abused with impunity.