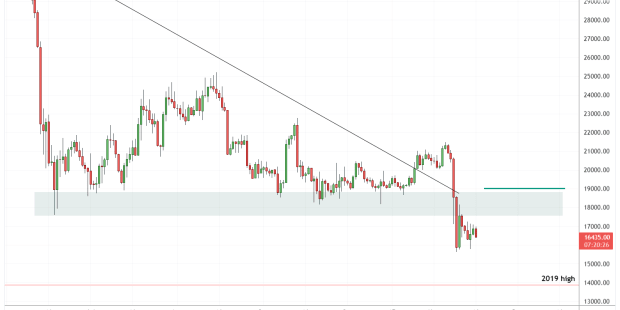 “Fed Watch” is a macro podcast, true to bitcoin’s rebel nature. In each episode, we question mainstream and Bitcoin narratives by examining current events in macro from across the globe, with an emphasis on central banks and currencies.

In this episode, CK and I cover our reactions to the FTX debacle, the latest consumer price index (CPI) numbers from the U.S. and the new central bank digital currency (CBDC) pilot by the Federal Reserve and banks. We touch on the G20 meeting in Bali, but run out of time at the end and don’t cover it in depth.

CPI Numbers From The U.S.

We had to skip last week’s show due to scheduling conflicts, so we missed covering the CPI numbers. This week, I read out some of the important details of the data.

October’s headline CPI change was +0.4%, almost half of the Cleveland Fed’s CPI Nowcast projection of 0.76%, and far below the industry forecast of 0.6%. It really shocked the market and stocks rallied hard.

Bitcoin’s expected reaction would have matched that of stocks if it were not for the FTX collapse happening at the time — even though FTX didn’t hold any bitcoin anyway, as it turns out. This move in the bitcoin price was therefore a sympathetic move with the industry. The correlation between altcoins and bitcoins won out over bitcoin’s correlation with stocks. However, that is evidence that bitcoin is oversold from a fundamentals perspective.

Shelter was the largest component in the monthly CPI and accounted for almost half of the increase. On the show, I spend some time explaining how the shelter component is designed to lag by 12-24 months. Without the addition from the lagging housing sector, CPI would have been 0.2% for the month. Annualized, that is 2.4%.

It is important to focus on the month-over-month change because that is the fundamental unit used to create the year-over-year (YOY) headline number. The YOY change does not do a good job of recognizing directional changes like peak CPI. You can think of it like a 12-month period moving cumulative change, similar to a moving average. The influence on the 12-period moving cumulative change of a sudden qualitative shift will be minimal in the first few periods. It is only after the new trend is well established that the broader 12-period average plainly communicates the data.

We went through 10 charts on the show, but I won’t cover them all here.

First up is bitcoin. You can see clearly the breakout of the pattern and the ensuing FTX dump. The horizontal zone was previous support turned to likely resistance. I also added a green line to denote the level with the most volume by price resistance as well, namely $19,000.

Next up is the U.S. dollar. Showing is the current rally, top and possible new higher range. I expect the behavior of the dollar to remain similar to the era after the Global Financial Crisis (GFC).

So far, the behavior of the dollar has been very similar to 2015 when the dollar rallied to the 1.618% Fibonacci extension and then was range bound — as you can see in the pink line. A copy of the pattern with tops matched up.

I expect the dollar to remain range bound as the financial system recovers slowly from the damage done by the acute dollar shortage. We can see this recovery in many currency charts, like the Hong Kong dollar, the Japanese yen and the euro.

We spent a few minutes discussing the above chart. For the first time in this cycle, the 5- and 10-year Treasury yields have entered the Fed Funds target range. Not only that, but the 10-year has fallen below the reverse repurchase agreement (RRP) rate of 3.8% and the lower limit of the Fed Funds of 3.75%.

This is a major change and a major component of my analysis of the Fed’s monetary policy going forward. If rates stop listening to Jerome Powell, the Fed will be forced to pivot.

We were surprised to hear of the Federal Reserve’s pilot program with banks going forward to test a new dollar CBDC. We have been quite clear on “Fed Watch” that we do not expect the Fed to approve the use of a CBDC, instead they will legitimize USD stablecoins, bringing them into the Federal Reserve system.

I read from an article on The Street, however, during the show I ran out of time to cover it in detail. I recommend reading it in full.

“The proof of concept (PoC) project will test a version of the regulated liability network design that operates exclusively in U.S. dollars where commercial banks issue simulated digital money or “tokens” — representing the deposits of their own customers — and settle through simulated central bank reserves on a shared multi-entity distributed ledger.”

I don’t blame you if you don’t understand that word salad. CK and I are bitcoin specialists and we can barely follow it. Nothing in this pilot program shows that the Fed is close to a CBDC. We maintain our reasoning that Jerome Powell and the Fed will not go down this road, but they have to move quickly to make their intentions clear and bring USD stablecoins into the fold or else the next chairman might follow along with globalist leanings.

I also quote from Vice Chair Randal Quarles’ 2021 speech about CBDCs where he demonstrates a firm grasp of the CBDC game. We recommend reading it in full, as well.

“I emphasize three points. First, the U.S. dollar payment system is very good, and it is getting better. Second, the potential benefits of a Federal Reserve CBDC are unclear. Third, developing a CBDC could, I believe, pose considerable risks.”

Lastly, we cover the G20, but to be honest, we don’t have time to do it justice. Here is a link to The Guardian’s five takeaways from the G20 meeting.

This is a guest post by Ansel Lindner. Opinions expressed are entirely their own and do not necessarily reflect those of BTC Inc. or Bitcoin Magazine.