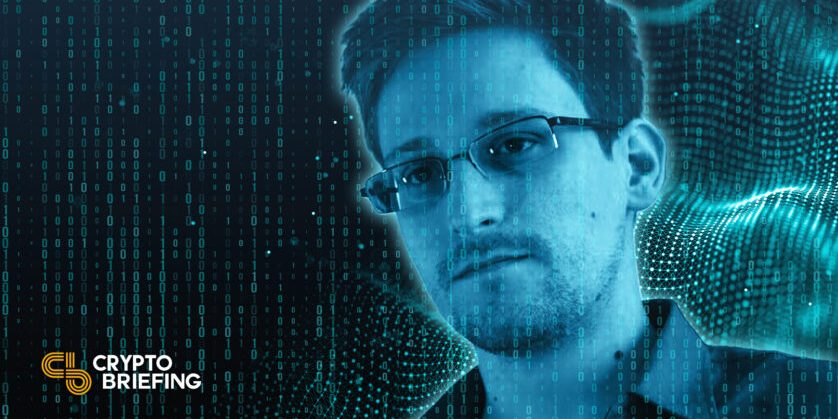 Edward Snowden has been active on Crypto Twitter over the past few months, possibly indicating a deep involvement in the space.

When Edward Snowden leaked classified documents from the National Security Agency in 2013, he attracted media attention worldwide. Then a computer intelligence consultant employed by the U.S. government, Snowden gained notoriety for revealing that the National Security Agency was spying on American citizens, prompting widespread debate about privacy and human rights. Some branded Snowden as a hero. Others called him a traitor. Within weeks of his story making headlines around the world, he was charged with violating the Espionage Act of 1917. Snowden fled for Russia two days later. Now permanently based in Moscow, he was awarded citizenship earlier this year.

Thanks to the attention his leaked files received, Snowden is one of the world’s most famous whistleblowers. But while most people recognize him for his fateful act against the world’s most powerful government, he’s seen in a different light in the cryptocurrency space. Snowden was an early Bitcoin proponent, endorsing the top cryptocurrency’s decentralized properties when the digital assets ecosystem was a fraction of its current size. He’s been outspoken on the importance of privacy, something crypto’s most ardent believers have always supported. And more recently, he’s become a Crypto Twitter icon. While Snowden’s ascent in the crypto space has caught some of its believers off-guard, it shouldn’t surprise those who’ve followed his story. Because in many senses, Snowden should be one of Internet money’s most obvious advocates.

The U.S. government charged Snowden with espionage and stealing state property, but he argued that he was leaking the classified files for the greater good. Snowden shared the documents with several journalists because he didn’t agree with his country’s mass surveillance operations, and he felt that privacy was a basic human right.

It makes sense, then, that he’s also supported privacy coins designed to help people preserve their financial privacy. Still a prominent public figure today, Snowden has repeatedly spoken out about the importance of privacy. In April, it was revealed that he was one of six participants in Zcash’s “Parameter Generation Ceremony,” helping launch the zero-knowledge proof-based currency under the alias John Dobbertin.

Snowden has also namechecked Bitcoin on many occasions, but he’s hinted that he thinks the top cryptocurrency is flawed due to its public nature in the past. “[Bitcoin] is failing as an electronic cash system because cash is largely intended to be anonymous,” he said at the Consensus 2022 crypto conference. “I am worried about a world in which our money is used against us.”

Snowden has also expressed malcontent over the Department of Justice’s decision to sanction Tornado Cash, a privacy protocol that helps cryptocurrency users obfuscate their transaction history. As central banks around the world prepare to launch their own state-backed digital currencies that threaten to undermine the principle of a free society, Snowden’s views on privacy could become all the more pertinent over the next few years.

Every active crypto user wishes they could nail tops and bottoms, but Snowden has proven he’s more skilled at timing the market than most. In March 2020, Snowden commented on the crypto market’s panicked response to COVID-19, taking a contrarian bullish view in the hours following a severe crash that became known as “Black Thursday.” The crypto market had tanked on the news that the coronavirus had been declared a global pandemic, with Bitcoin and Ethereum plummeting over 40% in a day. But as traders and holders warned of doom ahead, Snowden offered a more optimistic take on the situation. “This is the first time in a while I’ve felt like buying bitcoin,” he wrote. “That drop was too much panic and too little reason.” Black Thursday would mark a generational bottom for the top cryptocurrency, and by 2021 it was leading a bull market that spanned the entire crypto space. 18 months after Snowden called out the “panic,” Bitcoin peaked at $69,000—a 1,600% increase from the bottom.

Interestingly, Snowden also chimed in on the state of the market shortly after the ecosystem was rocked by FTX’s collapse. In a one-sentence tweet posted on November 14, he warned of “trouble ahead” but said he was “starting to feel the itch” to re-enter the market alongside a photo showing where he’d nailed the March 2020 bottom call.

There’s still a lot of trouble ahead, but for the first time in a while I’m starting to feel the itch to scale back in. pic.twitter.com/saZXYq8MT2

While it’s too early to say whether crypto has hit a local bottom, Snowden has proven that he has his finger on the pulse regarding market moves. Such prescience typically only comes with experience, hinting that Snowden likely has some.

Snowden has made no secret of his belief in the importance of privacy and monetary freedom over the years, but he’s made his close proximity to crypto particularly obvious over the ongoing winter period. Snowden has repeatedly surfaced in conversations on Crypto Twitter in recent months, adopting dialect like “lmeow” (crypto speak for “lmao,” popularized by the pseudonymous cat character CL) and interacting with popular “anon” accounts like DegenSpartan.

Whenever Snowden has appeared in Crypto Twitter conversations, the community has welcomed him with open arms. Crypto’s 24/7 diehards have expressed amazement that he could be “one of us,” but Snowden’s deep interest makes sense in the context of the technology’s long-term potential.

His clear understanding of the crypto community and its idiosyncratic nature shows that he’s deep in the reeds, following the fast-moving world close enough to know all of the big memes and personalities. In fact, some have speculated that he may have an “alt” account on Twitter specifically for interacting with crypto folks. Snowden has not publicly confirmed whether he has any secret pseudonyms to date, but it wouldn’t be surprising given his recent activity.

As Snowden has become a more prominent face in the crypto community, he’s increasingly weighed in on topical issues in the space. Most notably, he’s shared his takes on the FTX crisis, calling out disgraced wunderkind Sam Bankman-Fried over his fraudulent behavior at the helm of the collapsed exchange. On November 13, Snowden drew a comparison between Bankman-Fried and Tornado Cash developer Alexey Pertsev, taking shots at SEC Chair Gary Gensler for his relationship with FTX’s former overlord. “The White House sanctions and arrests kids for the “crime” of building privacy tools to protect you, while “regulators” were quietly palling around with the thieves who just robbed 5 million people. The difference? The thieves were big political donors,” he wrote.

Snowden made a bigger sacrifice than most people will ever face when he called out injustice within the U.S. government in 2013, so his comments on FTX and Tornado Cash shouldn’t shock anyone. Beyond these recent scandals, though, Snowden’s place in crypto feels apt. Many people are drawn to Bitcoin and other cryptocurrencies because they think the traditional financial system is flawed. While Snowden has evangelized crypto as a technology more than a disruptive alternative to banks, it’s clear that he subscribes to the view that it could make the world a better place.

Most of crypto’s biggest enthusiasts would argue that this technology is the world’s most powerful pushback against government control. In 2013, Snowden went against his own government to leak classified information knowing that his actions could cost him his freedom. In retrospect, it seems obvious that he would become one of crypto’s biggest stars.

Disclosure: At the time of writing, the author of this piece owned ETH and other crypto assets.

Bitcoin “Is Failing as an Electronic Cash System”: Edward Snowden

The American whistleblower has expressed his concerns about the financialization of the crypto space, but added that he sees huge promise in the technology.  Edward Snowden Talks Bitcoin Edward Snowden…

Edward Snowden and Elon Musk believe Bitcoin will be fine despite FTX imploding last week, with Snowden even stating he was considering increasing his exposure. “BTC Will Make It” Some…