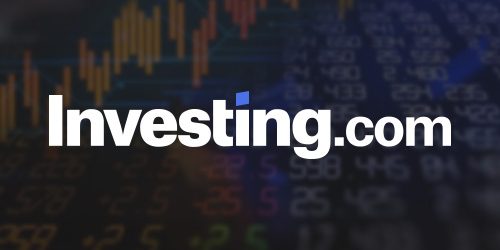 Authorities are on the hunt for the controversial Terraform Labs CEO after a Seoul court issued a warrant for his arrest last week.

Kwon insisted that he was “not “on the run” on Twitter) Saturday. Authorities have suggested otherwise.

Do Kwon may or may not be “on the run,” depending on whom you ask.

Questions over the Terraform Labs CEO’s whereabouts surfaced this weekend after Singapore authorities issued a statement claiming he was not in the country. Reuters reported on the development Saturday. 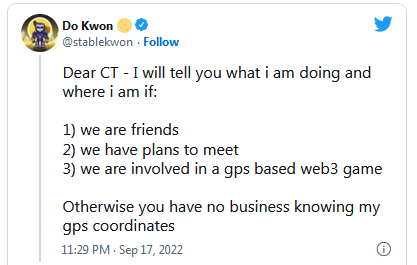 Within hours of the update, Kwon took to Twitter (NYSE:) to dismiss the claims.

“I am not “on the run” or anything similar – for any government agency that has shown interest to communicate, we are in full cooperation, and we don’t have anything to hide,”

He added that Terraform Labs had held itself to “an extremely high bar of integrity” as it faces lawsuits in multiple jurisdictions. Crypto Briefing reached out to Kwon to ask about his whereabouts but had not received a response at press time.

South Korean news outlet Yonhap followed Kwon’s tweets with an update Sunday, reporting that authorities had dismissed Kwon’s claims. According to the report, the prosecution concluded that “it is clear that he escaped.”

The report further noted how Kwon had dissolved Terraform Labs’ Korean entity in April in the lead-up to Terra’s $40 billion and then departed for Singapore, something Kwon claimed was a pure coincidence when questioned following Terra’s implosion.

This weekend’s developments come after a Seoul court issued warrants to arrest Kwon and five of his associates earlier this week. The warrants alleged that the group had violated Korean capital markets law, local media reported citing a message from the prosecutor’s office. Following the update, South Korea’s Ministry of Foreign Affairs sought to revoke Kwon and four of his accomplices’ passports.

Should Terra’s Controversial Boss Be Jailed?

Kwon’s possible arrest has been a hot topic of debate in crypto circles since Terra’s failure in May, where a token called “JailKwon” launched earlier this month. Many crypto community members have questioned how Kwon has evaded arrest to date, but the space has been divided on whether he broke any laws in overseeing Terra. Kwon and Terraform Labs are currently under investigation by Korean regulators and the U.S. Securities and Exchange Commission and face multiple class-action lawsuits.

Besides Terra’s implosion, the opaque nature of Terraform Labs and the Luna Foundation Guard’s operations has come under scrutiny in the community, particularly after more than $1 billion worth of disappeared from LFG’s reserves during UST’s collapse. LFG said it spent the funds to preserve UST’s peg but never produced any proof.

While it’s on the authorities to decide whether Kwon should be jailed, as much as he has claimed that he’s not hiding, it’s apparent that authorities are keen to speak to him. Even if Kwon isn’t charged with any crimes, he’s become a villain in the crypto community due to his conduct in the lead-up to Terra’s failure.

Kwon became notorious for his pompous takes on Crypto Twitter, regularly describing others as “poor” and making thinly veiled attempts to endorse LUNA through his and Terra’s official accounts. Terra’s attempts to market UST as a “stablecoin” have also sparked debate over whether Kwon and his company intentionally misled investors.

After Terra’s blow-up, Kwon was criticized for launching a plan to revive Terra as Terra 2.0, cloning the blockchain minus its flawed stablecoin. Terra 2.0’s LUNA took a hit this week as the arrest warrant news surfaced, as did (the ticker for the original LUNA).

Does Kwon deserve to be jailed? Maybe, but perhaps that’s not the only question worth asking. Did he display an apparent lack of ethics before Terra collapsed? Absolutely—and for that, many crypto enthusiasts would agree, it looks like Kwon is finally getting his just deserts.